The earliest settlers anxiously awaited the mail to learn the news from home. Before the train was extended through McHenry County, someone would travel down to Elgin and bring the mail back to Crystal Lake.

The first post office was established in Crystal Lake in 1838, with Beman Crandall serving as postmaster until about 1848. Citizens would go to the post office to collect their mail and post their letters.

To commemorate the 20th anniversary of regular air mail service, National Air Mail Week (NAMW) was established for May 15th to 21st, 1938.  Activities were planned in an effort to get each citizen to “give wings to your letters” by mailing and/or receiving an air mail letter during the week-long celebration.  A commemorative 6-cent Eagle multi-colored air mail stamp was issued for the occasion.

Crystal Lake joined in the promotion of National Air Mail Week.  Under the direction of postmaster Mrs. Elizabeth K. Butler, a committee of citizens was formed to organize activities and make this a great celebration.

The weeks leading up to National Air Mail Week were filled with great enthusiasm and preparation.  An essay contest, “Wings Across America” was established.  Mrs. Butler offered a $5 award for the best essay written by a Crystal Lake Community High School student.  Local winners were entered into a state and national contest.  A poster contest was also held for grade school and high school students.

National Air Mail Week had finally arrived!  It was determined the first air mail flight originating at Crystal Lake would take off on Thursday, May 19, 1938 from Ebel’s Field.  The Ebel family owned a large farm situated between Crystal Lake, Cary and Algonquin.

Citizens were instructed that all mail intended to be dispatched on the first plane must be in the post office not later than 4:00 PM on Thursday, May 19th.  Mail from Cary, Fox River Grove and Algonquin was also included on the Crystal Lake flight.  Residents were urged to send one letter by airmail to help make the observance a success. 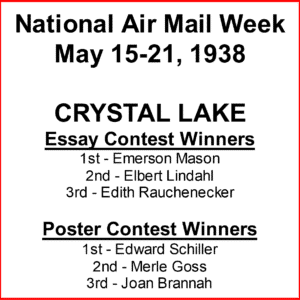 And then….at 4:45PM the crowds were filled with excitement as pilot John F. Jaenicke of North Chicago landed his Stinson plane on the field.  Mrs. Butler handed him a sack containing 1,130 pieces of mail, and Jaenicke quickly took off with his historic cargo!

LOOK AT THIS!! The Crystal Lake Historical Society has obtained actual film footage of the program and Crystal Lake’s first air mail pick-up!  Click here to view this 3-1/2 minute video. 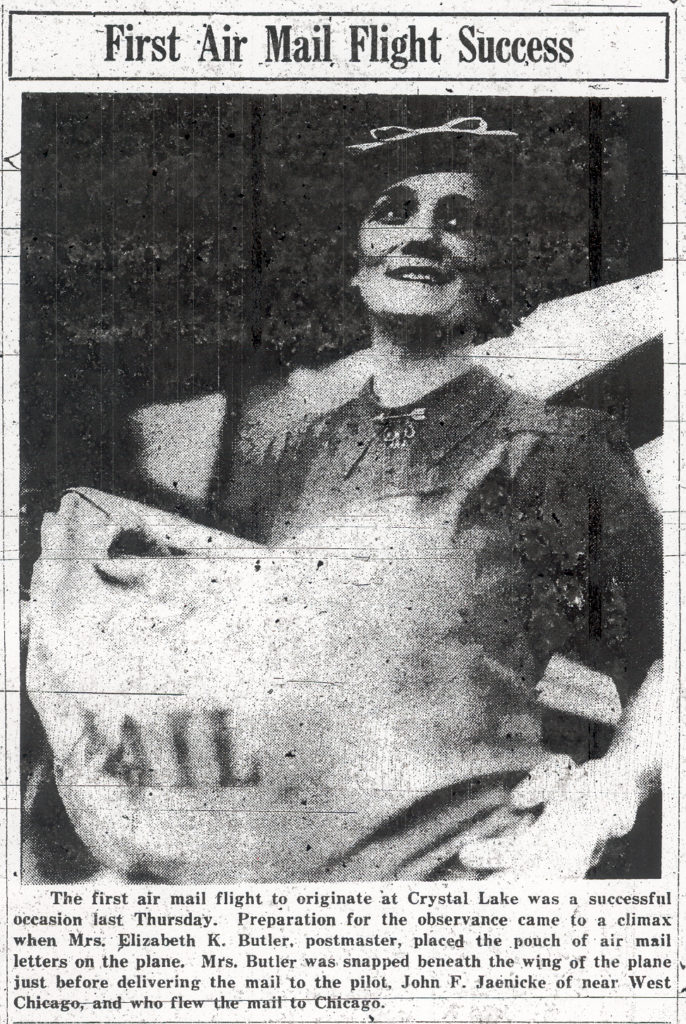 Photo and caption appeared on the front page of the Crystal lake Herald, Thursday, May 26, 1938