This history of Crystal Lake’s Methodist congregation was provided by First Church:

Around 1835, the first settlers came to Crystal Lake and found it a good place to live.  That same year, George Stickney, Christopher Walkup, Uriah Cottle and A.W. Beardsley became instrumental in establishing the community’s first church, known as the Virginia Church after the area from which many settlers came. This church was a non-denominational body formed to serve the religious needs of the area. The organizational meeting for the Virginia Church was held in the home of Uriah Cottle, a Methodist, and the community’s first religious service was held in the home of Christopher Walkup.

In 1839, the Methodist Church in Crystal Lake was organized. By the following year, the membership was 51. In 1841, Methodist Camp meetings were held in the wooded area near what is now the town of Woodstock. By 1846, services were being held in a log cabin at the northwest corner of McHenry Avenue and Virginia Street (Route 14).

In 1858, a church was built at a cost of $1,400 on Virginia Street across from what is now McCormick Park. However, most members lived in Nunda, so a hall was rented there and services were held in both locations. The union of those two congregations came at about the same time that the villages of Nunda and Crystal Lake joined to become one. The 1858 church building was later sold to the German Lutheran Congregation and moved to McHenry Avenue near Church Street.

In the late 1860s, the old Congregational Church building (built in 1849) was purchased for $400. It was fixed up and moved to the corner of Crystal and South Railroad St (now Grant and Woodstock Streets). In the early 1870s, this church building was sold to Josiah Walkup and it was remodeled into a residential dwelling. Later this building was added onto the existing Pingry Hotel to make it larger.

A three story, five bedroom parsonage was built in 1897 at the corner of Brink and Williams Streets and was used until 1958. In the mid-1950s, the parsonage was moved to 20 Paddock Street. 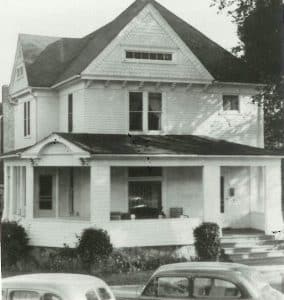 The 1873 church was extensively remodeled in 1893 and again in 1920. In the latter remodeling, a new pipe organ was dedicated. The church then boasted a membership of about 200 and the familiar spire of this church could be seen from almost any approach to Crystal Lake. It had become a landmark. The downtown church also became known as “the little white church surrounded by parking meters”.

In 1948, the membership was listed at 365, with 25% of the increase having been in the previous four years. By 1952, it became apparent that new facilities were needed to serve the growing congregation and the growing community. The church property was sold to Mr. Lester Gieseke. When it came time to demolish the church, the building was “put up for grabs”- free to the party who would haul it away from its site in the heart of Crystal Lake’s expanding business district. (see Lost Crystal Lake article) Saved from demolition were the stained glass windows, the bell and a few of the pipes from the organ, some of which were used in the organ in the new church.

A $200,000 church was designed by architects Stade and Cooley. With income from the sale of the downtown properties, $30,000 in advance gifts pledged by 24 members and an initial pledge goal of $70,000, it was decided to proceed with a new church. In October 1952, two hundred members and friends gathered for the groundbreaking at the new church site at the corners of Crystal Lake Ave, Dole Ave, and Pine Ct. Construction began April 11, 1954 with the cornerstone laid in July of 1954. The first formal services in the new church were held on February 5, 1955. As church-goers entered the narthex of the new church, they were greeted by the Good Shepherd window from the 1873 church. 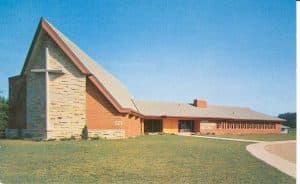 A new parsonage was designed by member Fred Lindsay and ground was broken for the home at 303 W. Crystal Lake Ave on August 31, 1958. This home was first occupied by Rev. Lloyd Coleman in January of 1959. It has since been sold.

Between the years 1953 and 1968, memorial pews replaced the original chairs, memorial lights replaced the original lighting in the sanctuary (now Hale Chapel), a pipe organ with chimes and a memorial carillon were added to the church. In addition to the original four and a half acres, three more lots were purchased for parking and recreation. An addition gave the church space for 12 school classrooms (allowing for the preschool to open), a memorial chapel, a pastor’s study, a library and much-needed storage space.

In later years, additional updates and landscaping occurred, including the addition of the Chapel in the Woods in 1971. In 1994, a new sanctuary and more education space were added at a cost of over $2.4 million. In the early 2000s, a columbarium was erected. The church celebrated its 175th anniversary in 2014 with several events, including a meal and a hoe-down as well as a reunion of sorts with prior pastors. In 2021, the memorial courtyard in the center of the church was beautifully renovated.

A History of Pastors: