By 1925, plans were underway to build a large bath house for the beach.  Architect Frederick Stanton was hired to provide the plans.  The main building would be 40 x 80 feet facing the park with exits towards the beach.  On each end of the main building were smaller rooms for concessions such as lunch, soft drinks, etc.  At the east end of the building beyond the concession rooms were the men’s locker rooms, showers, and lavatories.  Women’s facilities were exact duplicates at the other end.  Total construction cost was $30,000.

The Recreation Center and Bath House at the beach was opened the 4th of July weekend of 1926.  According to the Crystal Lake Herald newspaper dated July 8, 1926, more than 100 swimming suits were rented that first opening weekend, at a fee of 25 cents a suit.  Rental for a locker was 10 cents and a towel was 5 cents to rent.  However, renting these items was not necessary if you wore your suit to the beach and carried your own towel.  But, “People will not be permitted to drive to the lake in their civilian clothes and change to bathing suits in their cars, as in days gone by, a condition over which there was considerable criticism,” according to the Crystal Lake Herald of July 15, 1926.

Today, the Main Beach Building looks much as it did in 1926.  The brown brick walls and the Mission tile roof are the same.  Palatial windows still look out over the sparkling waters of Crystal Lake, affording some of the most spectacular sunsets to behold. 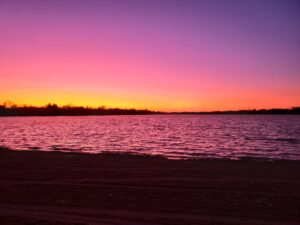 Congratulations to the Crystal Lake Park District as they celebrate 100 years of fun!

Click on the above to view a video presentation celebrating the 100th anniversary of the founding of the Crystal Lake Park District.