The Teckler Building has stood proudly at the corner of Williams and Brink for over 100 years.  Built in 1910 by local real estate tycoon, Charles L. Teckler, the building has “seen” its fair share of changes in Downtown Crystal Lake.  If walls could talk…what would they tell us about the people, organizations, or businesses that have occupied or owned the Teckler Building?

In the early 1900s the name “Teckler” was well-known throughout the Crystal Lake community. Charles L. Teckler was a respected businessman and a prominent citizen.  He was known as the “Dean of Real Estate.” 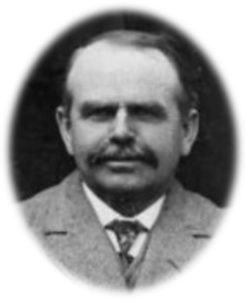 Started in 1910, and completed in March 1911, the Teckler Building was erected to fill a local need for a large meeting space/banquet hall.  The Modern Woodmen of America (fraternal organization) was the driving force to have Teckler’s building include this second floor amenity.  Taking this one step further, the building was designed so the large meeting space/banquet hall would have no central support posts or columns.  Iron pillars were used in the wall formation, extending from basement to roof, with huge iron girders for the roof supports.  This eliminated the need for central support columns. 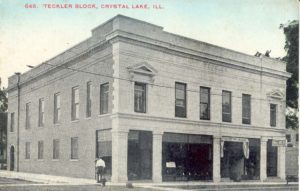 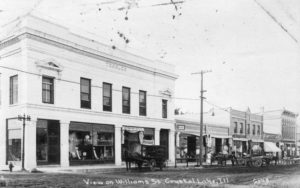 In addition to the Modern Woodmen of America (who rented the hall for $50 a month), other organizations to use the hall in the early days included the American Legion, Royal Neighbors, Mystic Workers of the World, and Bethany Lutheran Church.  The hall also hosted dances, public gatherings, and meetings of every kind.

An early newspaper article further describes the banquet hall as, “No better place could be desired than this for a banquet, a basket social or other like festivities.”  Today, the same could be said, as the second floor hall is known as “Old Towne Hall,” and continues to host dances, public gatherings, and meetings of every kind.

In addition to the banquet hall, the second floor of the Teckler Building has several offices facing Williams Street.  Teckler oiginally had his real estate office here, as did a local dentist, Dr. L.L. Baker.

The first floor of the Teckler Building has three separate retail spaces.  The largest of these is closest to the corner.  It was originally leased to the North Shore Electric Company (Public Service Co.), with a grocery store and millinary (hat) shop filling the two smaller spaces.  Through the years, a wide variety of businesses have occupied the smaller first floor storefronts, including Crystal Photo Co. and Bellows Pharmacy.  Public Service Co. maintained its large office in the Teckler Building for decades before eventually turning the space over to the Crystal Lake Savings & Loan Association. 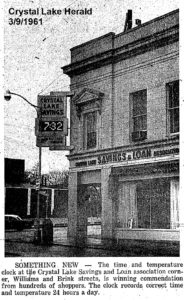 In 1965, Leonard and Dorothy Heisler purchased the Teckler Building, moving their shoe store known as “Heisler’s Bootery” from its location on Woodstock Street to the corner of Williams & Brink in early 1966.  Heisler’s Bootery was started by Leonard’s father, John Heisler, back in 1908.  The business and building are still owned by members of the Heisler family.

At the time it was built, the front of the Teckler Building was clad with white architectural terra cotta, which was manufactured locally at the American Terra Cotta & Ceramic Co., located northeast of town.  The name “TECKLER” was etched near the top of the front façade.

Time and weather have taken its toll on the Teckler Building.  Pieces of the terra cotta have chipped, cracked, or completely broken off.  The name, “TECKLER” has also disappeared, although early photographs remind us it was once there.

In 2016, the current building owners, Jeff and Carol Heisler, made a significant reinvestment in the property by having the terra cotta front of the building repaired and restored. Heisler’s Bootery, owned by brother Jim Heisler, continues to occupy the large, first floor storefront.  And, the Teckler Building is still standing tall and proud at the corner of Williams and Brink, in the heart of our Historic Downtown.