History of the Cemetery

The Crystal Lake Cemetery (also known as the “Lake Avenue Cemetery”) is the oldest public burying ground in Crystal Lake and Algonquin Township.  The cemetery was laid out in 1840.  According to the book, “The History of McHenry County, Illinois” which was published in 1885, the first person buried here was Ella King, daughter of Isaac and Almina King.

The Crystal Lake Cemetery is the final resting ground for many significant people who are part of Crystal Lake (and Algonquin Township) history.  These include:

Beman and Polly Crandall – credited as being the first settlers of Crystal Lake.

Hannah Beardsley Wallace – credited as being the first school teacher in Crystal Lake.  She and her first husband, Franklin Wallace (also buried here), were married in 1840.  Beman Crandall was the Justice of the Peace performing the ceremony, and this was the first marriage performed in Algonquin Township.

Ziba Beardsley (Hannah’s older brother) – is said to be the one who stood on the shores of our beautiful spring-fed lake and declared, “the waters are as clear as crystal.”

John Brink – local government surveyor who ran many of the township dividing lines throughout northern Illinois.  He is also credited with many of the earliest plat maps of McHenry County.

William Day Gates – of Terra Cotta fame and his father, Simon S. Gates who at one time had owned much of Algonquin Township, are both buried here.

Colonel Gustavus and Henrietta Palmer – Their house, home to the Crystal Lake Historical Society, is the only structure in Crystal Lake listed on the National Register of Historic Places.

Ownership of the cemetery was transferred to Algonquin Township in the late 1990s.  At the April, 2000 Town Hall Meeting, the citizens of Algonquin Township voted to apply for landmark designation of the Cemetery.  On August 15, 2000, the Crystal Lake City Council voted unanimously to approve the application for Landmark Designation of the cemetery. 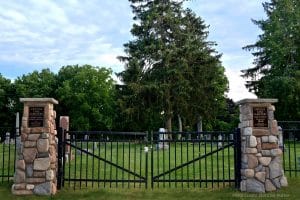 About the Pictorial Cemetery Database

The information in this database was compiled from a variety of sources.  The intent is to document as many of the burials known to be at the Crystal Lake (Lake Avenue) Cemetery.  Sources include: Cemetery records, McHenry County Genealogical Society Index of 1987, newspaper articles and obituaries, county histories, and on-site inspection.  Updates will be made to the database on an ongoing basis.

This database is the product of many hours of work by two couples: Martin & Julie Sohlberg and Bill & Diana Kenney.  The Sohlberg’s provided almost all of the photographs used in this database.  The Kenney’s inputted all of the data and converted it to an online format.  The Crystal Lake Historical Society recognizes and thanks these volunteers for their countless volunteer hours.

Index to the Pictorial Cemetery Database