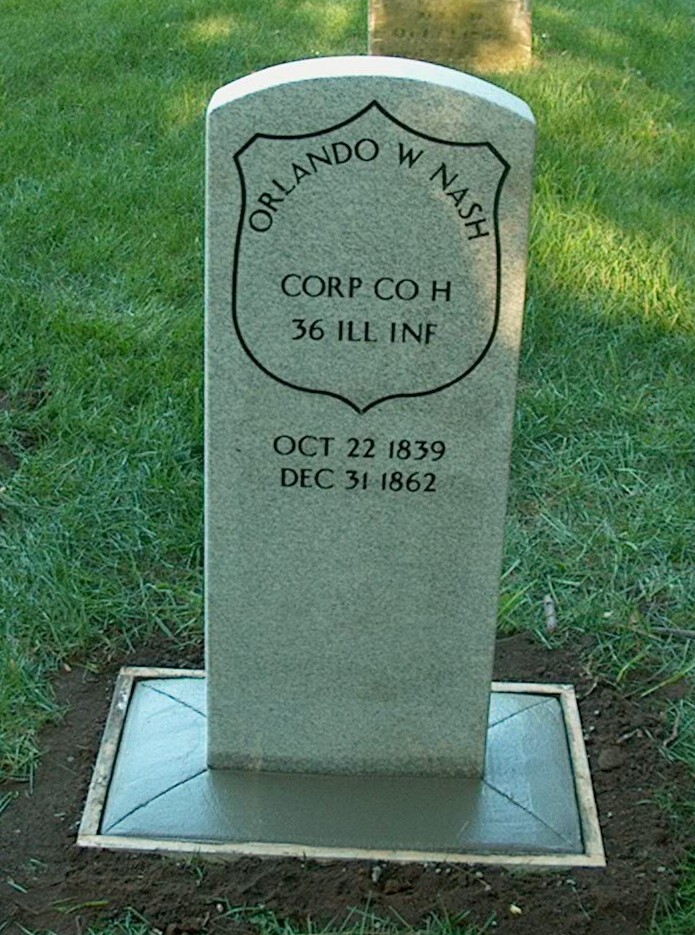 Orlando Wells Nash was born October 22, 1839 in Ohio. He was the son of Enos B. and Catherine Keller Nash. The family moved to Illinois in the 1840’s, and eventually settled in Crystal Lake, Algonquin Township.

In September, 1861, at the age of 22, Orlando left his family farm and enlisted for a three-year term in the Illinois 36th Infantry Regiment, Company H at the rank of Private. Company H was commonly known as “The Woodstock Rifles.” The 36th Infantry Regiment wintered in Missouri, and proceeded into Arkansas to fight at the Battle of Pea Ridge in March, 1862. The Regiment then moved on to Kentucky and was involved in several skirmishes, including the Battle of Perryville. On November 14, 1862, Orlando was promoted to the rank of Corporal.

The following excerpt is taken from a letter written on January 10, 1863 by Pvt. John H. Sackett of Hebron, who fought in the same regiment and company as Orlando Nash. Pvt. Sackett recalls and describes the Battle of Stones River: “You have in all probability before this heard of the great fight at Murfreesborough or Stone’s River, 27 miles from Nashville, Tenn. We marched the next day after Christmas and skirmished until Dec. 30 when the fight began in good earnest and there was heavy artillery fighting all day. We gained considerable ground but the next morning the rebs had been reinforced from Chattanooga and they overpowered us and drove us back and ent (sp?) our men up pretty badly. Our men fell back to the heavy cedar timber and there made a stand and fought until the 2nd of January when they evacuated Murfreesboro and left the place in our hands.”1

Several weeks after the Battle of Stones River, a small group of local citizens, led by Mr. John Brink, traveled to war-torn Tennessee to claim the bodies of Orlando Nash and Al Bunker (of Ridgefield) and bring them back to McHenry County for burial.
The diary of Wallace P. Benson (of Algonquin) who also served in the 36th Illinois, Company H, has the following notation: “January 30 (1863) – John Brink and Mr. Bunker called. They had Orlando Nash and Al Bunker’s bodies.”2

“The Woodstock Sentinel” includes a report from the 36th Illinois Regiment. The report is dated January 29, 1863: “Saturday last, our brigade went out to guard a forage train, in the direction of Shelbyville. The advance companies fired a couple of shots at rebel scouts, but we saw nothing of them. About 11 o’clock it commenced raining, and did not slacken until we reached camp, just after dark. Imagine our surprise when we had just commenced cooking our suppers, when four old familiar faces suddenly appeared among us–viz: George Bunker, of Ridgefield, John Brink, Mr. Ford and Mr. Sherwood, of Algonquin. Our uncomfortable day’s work was soon forgotten, for, it is needless to say, every one was highly gratified to grasp the friendly hand of an old neighbor, direct from home. Their stay with us was very short, as they started back Monday. They convey homeward the remains of Alvin Bunker and Orlando Nash, two young men who possessed the entire confidence and respect of all their comrades, and their absence throws a deep gloom over the company. They died as a “soldier loves to die,” nobly defending their country’s honor.”3

One final description is found in the diary of Martha Josephine Buck, who writes: “Thursday, February 5th. It has been snowing nearly all day, and I think if we make a great deal of haste abut it, we can manage to get a sleighride yet this winter. It can’t be possible for it to last a great while. This has been a pretty busy week so far. I feel in my bones that it has. Tuesday the funeral of Orlando Nash took place. The corpse arrived the day before. It had been buried about 3 weeks when Mr. Brink got there. He gave $90 for a metallic coffin and had the body taken up and brought home. It looked quite natural even after so long a time so those say who saw it. The coffin was not opened at the Church. There was a great crowd there.”4

In February, 1863, church services for Orlando Nash were held at the First Congregational Church, and he was laid to rest at the Crystal Lake Cemetery (now known as Lake Avenue Cemetery).
It is unknown if Orlando Nash’s grave ever had a headstone; but the new government-issued Civil War era headstone will now mark the final resting place of this Civil War soldier, who died defending the Union.