100 years ago, a woman, Sarah J. Beatty, was able to proudly admire her completed building at the northeast corner of Williams and Brink Streets.  The Beatty Building was beautiful, practical, and quite an accomplishment for a woman of her era.

Sarah J. Beatty was the widow of Justin V. Beatty.  Justin was born in Abington, Illinois in 1865.  His father was killed in the Civil War, and so he was raised by his mother alone.  Mrs. Beatty was an educator, and raised her son to have a love for the printed word.  After completing school, Justin worked for various newspapers in the Midwest before purchasing the Nunda Herald from Ira M. Mallory, the Herald’s first publisher.  Mr. Beatty was the owner and publisher of the Nunda/Crystal Lake Herald from 1896 until his death in 1912. 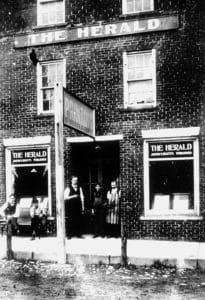 Sarah Jane Beatty was the daughter of Robert and Jeanette Andrews.  She was born in 1868 on her father’s farm in Nunda Township.  She was the only daughter in a family of eight children.  In 1906, she married Justin Beatty, and together they had one son, Glenn.  Justin’s unexpected death in 1912 (he was 46 years old) left Sarah with a newspaper business, numerous properties, and a young son to care for.  Within a year, the newspaper and building were sold to L.W. Cobb.

In September 1916, the Crystal Lake Herald reports, “Contractors are making estimates on plans for a handsome new business building to be erected by Mrs. Sarah J. Beatty on her lot at the corner of Williams and Brink Streets.  The building will be a two-story modern business structure with a 25-foot frontage on Williams Street and 100-foot frontage on Brink Street.  The lower floor will be divided into two store rooms 25×50 feet and the upper floor will probably be arranged for offices and living rooms.” 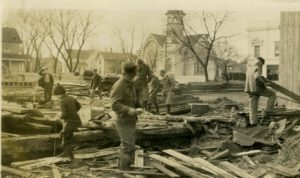 Construction of the Beatty Building took several months.  The building stood kitty-corner from the Methodist-Episcopal Church (seen in the background of this image).

Architecturally, the Beatty Building is described as Beaux-Art style.  The brick building has terra cotta ornamentation including decorative garlands, swags, and floral patterns.  Although started in 1916, The Beatty Building was not completed until 1917.  By July 1917, the first tenant was open for business!

The first tenant was also a woman, Miss Zella M. Biggs, who opened a ladies and children’s clothing store known as, “The Corner Shop”.

In 1917, the United States had just entered World War I.  On the homefront, The Red Cross was aggressively organizing local chapters to provide support for the war effort.  The local chapters, in turn, recruited women to provide knitted items for the soldiers overseas.  The Crystal Lake Branch Chapter of knitters was organized by Miss Zella M. Biggs.  Miss Biggs’ store, The Corner Shop, also served as the supply location of yarn for these knitters.  What a genius marketing strategy to bring the women of the community into her new place of business to pick up their Red Cross yarn supplies AND to see all that her new store had to offer!  The Corner Shop was a success, expanding into the full first floor space in 1922. 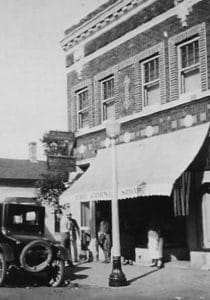 This 1920s image shows The Corner Shop on the first floor of the Beatty Building.  Dr. A.V. Lindberg had an office on the second floor.  Photo courtesy of George Lindberg.

During the 1930s, the first floor of the Beatty Building was occupied by various pharmacies including Shaw’s Drug Store.

In 1940, H.E. Tober purchased the building and moved his menswear store to this location.  Tober’s store remained a fixture at this location for decades.

Today, 100 years after the Beatty Building was completed, a ladies clothing store, The Clothes Gallery,  once again occupies the first floor space.