In 1889, Charles C. and Eunice Pingry purchased two lots at the corner of Grant Street and South Railroad Street (now known as Woodstock Street).  Lot 1 had an existing structure which included portions of the old Methodist Church (and the Congregational Church before that!).  It is unknown how much change occurred to the building in the very early days, but by 1893 (the earliest Sanborn Map available), the house had the same footprint it retained until 1915.  The second lot owned by the Pingrys had a large livery barn for horses.

Charles C. Pingry was born in New Hampshire in 1818.  In 1838 he accompanied his parents to McHenry County, settling on a farm two miles east of the village of Nunda.  On April 28, 1845 Charles married Eunice Johnson, an early school teacher in Nunda Township.

After their marriage Mr. and Mrs. Pingry settled upon a farm of 160 acres of government land, the deed to the same bearing the signature of President James K. Polk.  Their first home was of the rude sort common to the west in those days.  The husband, with his own hands, hewed the rough logs of which it was constructed.  The fireplace was of the capacious old-fashioned pattern, and the chimney of sticks and clay mortar, instead of stone or brick.  Above the living rooms was a loft, reached by a ladder in lieu of stairs.  The fireplace took the place of range and heater, and the fire was usually built with a “back log,” large and heavy enough to call for the united energies of two men to put it in its place.  This was a typical western home of the period.  Little by little Mr. Pingry added to his holdings.  At one time his farm embraced 430 acres, but sales have reduced it to 380 acres.

In the late 1850s, Charles and Eunice upgraded their humble log cabin.  Local stone mason, Andrew Jackson Simons, built the Pingrys a large house made of cobblestone.  The following description appears in the Crystal Lake Herald on April 21, 1927 after a disastrous fire destroyed the cobblestone house:

Stones were hauled from Lake Michigan at a point near Waukegan to be used for the walls.  They were round and in various colors, giving an appearance that was always pleasing.  When completed, the Pingry’s house was one of the most costly houses in the county.  There was a basement under it and the first floor was for family use.  On the second floor was a large ball room and this was the meeting place for dances, lodges and other social gatherings.  Meals were served and crowds came there from far and near.

The celebrated Tom Thumb and wife, midget folk, gave an entertainment in this hall one night and so large was the crowd that the floor gave way and some of the people were injured.  Other entertainments were also held there.

In 1867 Charles and Eunice purchased the Algonquin Hotel and left the farming operation to their sons Frank, John, and Sumner.  After running the Algonquin Hotel for 22 years, the Pingrys moved to Nunda (Crystal Lake) to open The Pingry Hotel across from the downtown train depot.

The Pingry Hotel was beautiful and elegant.  Some guests stayed for a night or two.  Some of the guests actually lived at the hotel, enjoying the hospitality of the gracious Pingrys.  Many of the live-ins worked for the railroad, as evidenced by early census records.

In 1900, Charles and Eunice retired from the hotel business, leaving the operation in the capable hands of their son Sumner.  Charles C. Pingry died in 1904, and Eunice died two years later.

Sumner Pingry had been born in the original log cabin on the family farm in 1856.  With the exception of a few years farming in Nebraska and Kansas, he lived his whole life in McHenry County.  In 1882, Sumner married Josephine Hartquist in Algonquin.  The couple had three children: Lillian, Mabel, and Charles S.  When his parents retired from the hotel business in 1900, Sumner and Josephine quit farming and moved their young family into town to run the Pingry Hotel.

An interesting side-note about Sumner Pingry is found in his obituary which indicates he enjoyed ice skating and was considered a master figure skater!

The fine reputation of the Pingry Hotel continued under Sumner and Josephine’s care.  Business was doing so well that in 1915, an addition was added to the original building.  The May 20, 1915 Crystal Lake Herald offers this description:

The six-room addition to the Pingry House is rapidly reaching a state of completion.  In fact, it is now being plastered.  The addition, which measures 26×26 feet, consists of four bedrooms upstairs, another bedroom, an office, linen closet, lavatory and attractive open staircase on the main floor and a basement beneath.  There is also a porch 10 feet wide and about 50 feet long.  The Pingry House now has 22 rooms, 15 of them bedrooms.

In 1923, Sumner and Josephine retired from the hotel business.  Their son, Charles S. and his wife Elsie assumed the management and ownership of the hotel.  This was the third generation to own and operate the Pingry Hotel.

Charles Sumner Pingry was born on his father’s farm in Kansas in 1893.  By the age of 7, his family had moved back to Illinois, his father assuming ownership of the hotel, and from then on Charles literally grew up in the Pingry Hotel.   Charles graduated from Crystal Lake High School in 1911.  Other notable graduates from that year include Ethel Raue and William Chandler Peterson.

In September 1917, Charles answered Uncle Sam’s call for volunteers, serving in the United States Army during World War I.  After his discharge from the service in 1919, Charles returned to Crystal Lake and married a local girl, Elsie Hansen.  In 1920, the couple moved to Harvard, where Charles was employed by Hunt, Helm & Ferris.  He worked in Harvard for three years before returning to Crystal Lake for good.

Although Sumner and Josephine retired in 1923, they wished to remain living at the hotel.  And so, together with their son Charles, they planned to build a sixty-foot addition, with all facilities in modern hotel equipment, on to the present building.  On part of the first floor would be an eight-room apartment for Sumner and Josephine.  The addition was built by a local contracting firm, Berg & Naslund.

In addition to running the hotel, Charles S. Pingry was active in community affairs.  He was a charter member of the Crystal Lake American Legion Post #171.  The Post was named after his high school classmate, William Chandler Peterson, who had lost his life in World War I.  In 1930, Charles S. Pingry was elected Commander of American Legion Post #171.

This third generation of Pingrys – Charles and Elsie – managed the hotel which bore their family name for thirty-five years – longer than any other generation.  In 1958, the decision was made to retire.  Pingry maintained ownership of the hotel building, living in the first floor apartment built for his parents so many years before.  The hotel operation was taken over by Mr. & Mrs. Edward Landgren.  The Landgrens continued to operate the business under the name of The Pingry Hotel.

The October 30, 1958 edition of the Crystal Lake Herald offers this description:

During the years Charles S. Pingry has been in charge, guests have come to express highest praise for the hotel.  Modern rooms are always spotlessly clean and the best in service is provided.  “It is a seven day a week job to operate a good hotel,” Mr. and Mrs. Pingry said.  “Because of this we have been able to be away from business but very little throughout the years.”  The fine reputation of the hotel is widespread and guests return again and again when they come to this area.  Many make it their permanent residence.

The many friends of the Pingrys are happy that they will continue to reside here so “we can see you around.”  Naturally the Pingrys are pleased to have so many friends in a community where they have resided so long.  “We think we will enjoy taking it easy.” They told the Herald. 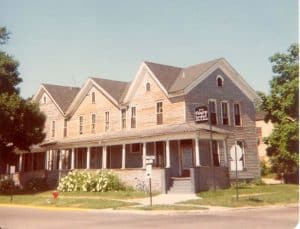 In 1967, the property was sold to local investors, Ivan and Joan Hill.  It was sold again in 1969 to R. Daniel and Vivian Malone.  The Malone family continued to operate The Pingry Hotel as a rooming house until early 1990.  The 100+ year old wooden structure had seen better days, and the Malones found the maintenance and insurance expenses were too high to continue operation. 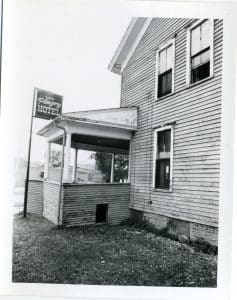 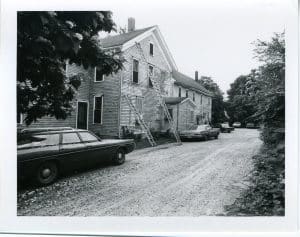 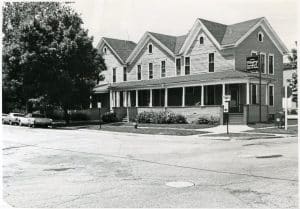 After standing on the corner of Grant and Woodstock Streets for 101 years, The Pingry Hotel was demolished in February, 1990.  If walls could talk, the old Hotel could have shared countless stories of guests, residents, traveling salesmen, honeymooners, and Pingry family members as they lived their lives at The Pingry Hotel.

Thanks to the generosity of the Humphrey family, we are pleased to share

the following movie filmed on 2/13/1990 by their father, Charles Humphrey.

Click on the image below to view this movie.