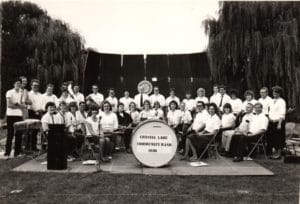 The Nunda Herald newspaper reveals the band in Nunda was organized in May, 1884.  It was known as “The Nunda Brass Band”.  Challenges to be met by the band  included raising money for uniforms, hiring a director, and finding men who could play an instrument.  The group must have been up for the challenge as by the following May they were playing on Saturday nights at the local roller skating rink, providing the instrumental music at the Memorial Day ceremony, and entertaining crowds at the public park in Crystal Lake (on Virginia Street) as well as at Nunda’s own park near the train depot.  Both parks had wooden platforms on which the band performed.

Little is known about the original Crystal Lake Band of the 1880s, although it is apparent  from newspaper snippets that one did exist.

By 1893, a raised bandstand with roof was erected in Crystal Lake’s public park on Virginia Street.  The bandstand was located on the west side of the park toward Florence Street, approximately where the water tower is today. 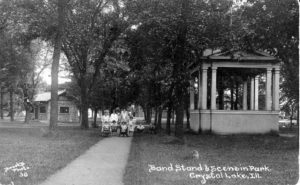 Although this bandstand existed in the park in the 1890s, it is unclear if the community had a full band of its own at that time. There were other musical groups in Crystal Lake and Nunda which may have provided the entertainment in the park.  These included Professor Slocum’s Orchestra, the Phoenix Orchestra, the Crystal Lake Cornet Band, students of Professor J.I. Sears School of Music, as well as several choirs and quartets.

In 1906, an announcement was made that, “The citizens of Crystal Lake have organized a band of 20 pieces with E. Militzer of Algonquin as leader.”  The group was proud of its new uniforms which were blue, trimmed in black. 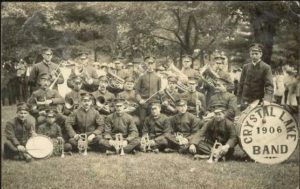 The Crystal Lake Community Band performed at the bandstand which had been built more a decade before.  Concerts were held on Wednesday evenings, weather permitting.

The sound of music in the park was silenced from time-to-time as the Crystal Lake Community Band would disband and then reorganize.  Efforts to reorganize occurred  in 1913, 1931, and 1942.  However, none of these efforts had lasting results.  And like all good things, the life of the charming bandstand in Crystal Lake’s public park on Virginia Street came to an end when it was demolished in the late 1940s.

Fortunately, the great music of today’s Crystal Lake Community Band hasn’t skipped a beat, as it continues to delight and entertain our citizens at parades and concerts.