In 1928, Frank P. Hayes purchased seven contiguous 5-acre tracts of land from Joachim (Joseph) and Minnie Dietrich.  The Dietrich’s beautiful brick house on McHenry Avenue was included in the transaction and stood about where the Bickford Assisted Living facility is today.  Joseph and Minnie (Pinnow) Dietrich, both German-born, had met and married in 1884 in Huntley.  The couple and their three children moved to Crystal Lake in 1905, farming and living on the land on the east side of McHenry Avenue.  It’s interesting to note that Minnie was the sister to Crystal Lake’s first mayor, William Pinnow.  The Dietrichs later gave up farming and moved into a house on Crystal Lake Avenue. 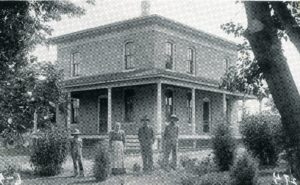 George, Minnie, Joseph, and Fred Dietrich stand in front of their home on McHenry Avenue – 1906

Frank P. Hayes was a successful stock broker, and commuted to Chicago for work each day.  A 1929 newspaper article, mentions that “Mr. Hayes thinks that Crystal Lake is one of the best Chicago suburbs in which to make one’s home, and it will continue to be one of the most desirable places in which to live.”  Frank and his wife Marie raised their four children Marshall, Jerome (Jerry), Judith and Courtney in this home on McHenry Avenue.

Without the obstruction of today’s abundance of buildings, the Hayes’ home overlooked the Crystal Lake Country Club’s property and golf courses.  Frank enjoyed the natural beauty and serenity of his own estate as well as the view out his front door.  He was an avid horseman and an expert polo rider, playing for the John D. Hertz polo team.  Frank enjoyed having  plenty of land, and he also loved the game of polo.  And so, he decided to create a polo field of his own!

Beginning in the Spring of 1929, work started on the Hayes’ polo field, which was located just north of the house.  Frank Hayes acquired several polo ponies, and began marketing the idea of team polo competitions in the community.  On August 18, 1929 the first polo match was held when the Crystal Lake team competed against the Crystal Lake Country Club team.  The match promised free admission for spectators and plenty of exciting play.  The Country Club team won by a score of 9 to 6, with their star player, Frank Hayes, scoring 6 of their goals!  The Crystal Lake Herald reports, “There was a large crowd watching the game and they were enthusiastic in their applause, appreciating the good plays, of which some exceptionally good ones were made during the game.”

It is unclear as to how long organized matches were played on the Hayes’ polo field, although certainly the field remained, as each of the Hayes children became expert riders.  In 1943 at the age of 17, son Jerry enlisted in the United States Army, joining the First Cavalry, the last mounted regiment out of Fort Riley, Kansas.  And the Hayes horsemanship continued when Jerry taught his own two sons to ride English because a Western saddle was “just too much leather.”

All good things must come to an end.  Frank P. Hayes died in 1950, and the family sold the farm soon after.  During the 1980s, the property was owned by Profile Publications. 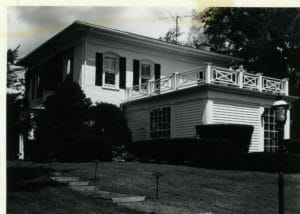 By the turn of the century, the house sat vacant and its condition quickly deteriorated.  In 2004, the Dietrich/Hayes House was demolished to make way for the Bickford Assisted Living facility.  With Bickford, a beautiful home once again sits on McHenry Avenue, only this place is home to senior citizens who grew up in an era of dirt roads, horses, and perhaps even witnessed a polo match or two!